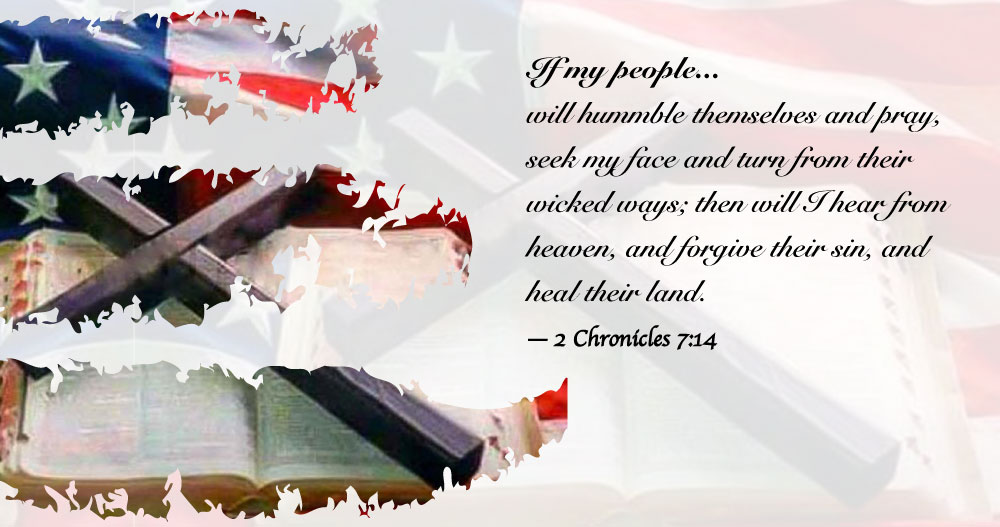 Christians rightly recite II Chronicles 7:14 and apply it to America in the hope that the Lord will hear our prayer and America will be healed and restored as a Godly nation. Let’s look at the context of this verse to make sure we understand the context as it might apply to America.

God’s promise to Solomon was after Solomon had obeyed the Lord’s command to David his father, to build the temple in Jerusalem for the Lord’s dwelling place. For the Hebrew that is where God was located, in the Holy of Holies because of their service and obedience to God.

Solomon had just dedicated the temple to the Lord when the Lord appeared to him at night. God stated that he has chosen the temple for the sacrifices.

Then he tells Solomon that there will be difficult times in the future but “if my people, who are called by my name, will humble themselves and pray and seek my face and turn from their wicked ways, then I will hear from heaven and forgive their sin and will heal their land”. — II Chronicles 7:14

Note that this is not a call to the entire nation but to the people called by his name, the Hebrews. There is also a condition in the form of “if”. However, he was attentive to their prayers and had consecrated (made sacred) the temple so that he will be there forever.

God then places some specific conditions for Israel’s leader, Solomon, to follow. Solomon must walk before God, do all that God commands and observe all God’s laws. He promises that if Solomon complies Solomon’s line will always rule over Israel.

Then God issues a series of warnings and spells out the consequences if Solomon turns away, serves other Gods and worships them. God will uproot Israel from the land he gave them, reject the temple, make it an object of ridicule and all people will know that this will be because Israel had forsaken God.

For a while Solomon did all that the Lord had commanded. He was the wealthiest man in the world and ruled over the most powerful and richest nation on earth. Israel at that time was much like America today, powerful and prosperous. It did not last.

Following Solomon’s death in 931 BC it took Israel just one year to lose its unity by dividing into two kingdoms in 930 BC. The northern kingdom under King Jeroboam led his people away from God so God removed them from his presence (2Kings 17: 21-23). The northern kingdom Israel was completely taken over in the Assyrian invasion in 743 BC. The southern kingdom, Judah, also succumbed to worship other gods and during the reign of Josiah (640-609BC) God removed his presence from Judah. This was followed by the conquest of the southern kingdom Judah in 586 BC by the Babylonians. In just 345 years Israel was no more.

However, 546 years later God would come to earth as a son to be the sacrifice for sin and write his laws on men’s hearts through the two great commandments to love God and fellow men. People who believe in this are called Christians.

God is the fundamental thread in both nations leading to parallels that can be drawn. As Christian Americans we would be wise to take notice of God in America.

In the late 16th and early 17th centuries Christians in order to escape persecution and freely express their faith were part of discovery voyages by England to settle a wilderness across the Atlantic Ocean we now know as America. The lost colony in Roanoke Island (1585), Jamestown (1607) and Plymouth Rock (1620) were under charters and compacts. We know them as Instructions for the Virginia Colony (1606), The First Virginia Charter (1606) and The Mayflower Compact (1620). They instructed the passengers to serve and fear God, to advance the Christian faith in the name of God. Later the Articles of Confederation (1643) and the Northwest Ordinance (1787) stated a purpose to advance the kingdom of Christ. All 56 signers of the Declaration of Independence were Christians and advocated for the Gospel of Jesus Christ in the lives of Americans and its importance for the country to prosper. Almost 70% of the signers of the Constitution were Christians. While the US Constitution never uses the name of God every state constitution does directly or as Divine.

These early Americans prayed and petitioned God to protect them in the formation of this new country we call America. The founding Americans felt that they had God’s blessing and protection. They carried him in their hearts as they settled this land.

Today we have data that tells us that Christianity in America, has become much like that of Hebrews of ancient Israelite who at one time had God’s protection but turned away

This is not speculation. Now the Question remains Has God turned away or can the people who are called by His name humble themselves and pray and seek His face and turn from their wicked ways so that he will hear from heaven and forgive their sin and will heal their land? As Christians we cannot answer that question for all but we can answer it for ourselves by loving God and keeping his commandments through Jesus Christ. For America like ancient Israel, as God’s people go, so goes the nation.

Note: The source of the historical data in this blog comes from To Know with Certainty: Answers to Christian Student’s Questions Before Leaving High School and available at www.toknowwithcertainty.com or Amazon.com plus the Bible (NIV).