The Cumulonimbus Cloud of Witnesses II

The Growth of the Church
By G. Lee Southard, PhD/ September 12, 2019/Spiritual Heritage 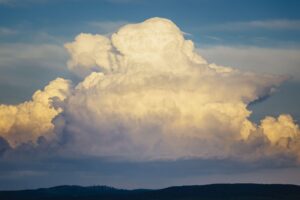 In Part I the growing great cloud of witnesses over the 500 years since Hebrews 11 was written was compared to Cumulonimbus clouds, the largest and most energetic of all the clouds in the atmosphere. During these 500 years the church had spread throughout the Middle East, North Africa, Asia, and Europe as far as Ireland during the fourth to ninth centuries. The church would change as it grew in power, geographic range and in corruption. The Dark Ages were the low point for the church of Christ. The cloud had become dark and ominous.

Rome had fallen to the Barbarians in AD 410, the church had split into Eastern and Western halves and the Western half filled a power vacuum created by the fall of the Roman Empire. This Roman Church was often run by corrupt Popes and it dominated, dictated and persecuted those not in agreement, even fellow Christians. It engaged in practices not in accordance with Scripture and with the financial assistance of wealthy landowners engaged in war with the Muslim world that had grown since the 7th century. The abuses of the church overshadowed many good deeds introduced by the church like lower and higher education, monasteries and hospitals.

In spite of this God was raising up faithful men, most of whom were in the church. They would save the church from these Dark Ages and help bring God’s Word back to prominence. Many would give their lives in the process. Here are a few. Thomas Aquinas (1225-1274), an Italian priest is considered one of the greatest philosophers and theologians of the Church. In his major work, the Summa Theologica, he sets forth the “Five Proofs of God’s Existence”; John Wycliffe (1330-1384) attacked the corrupt practices of the church and translated the Bible into English from the Latin Vulgate. His legacy is the Wycliffe Bible Translators; John Hus (1371–1415), influenced by John Wycliffe was one of the earliest to preach against the established Roman Catholic Church and its corrupt practices. He advocated trust in the scriptures. It cost him his life; Martin Luther (1483-1546), a German Augustinian monk challenged certain unbiblical practices and teachings of the Catholic Church. After posting in Wittenberg, Germany his 95 Theses debating these issues was excommunicated and precipitated the Protestant Reformation. Luther taught that salvation and eternal life are not earned by human works but are a free gift of God’s grace through faith in Jesus Christ. He translated the Bible into German; Ulrich (Huldrych) Zwingli (1484-1531) like Luther, he believed in the sole authority of Scripture, Zwingli died in a battle with Swiss Catholic cantons; William Tyndale (1494–1536) translated the Bible into English from both Hebrew and Greek texts. Betrayed, he was executed by strangulation and burned at the stake. His Bible was accepted in England and later became the basis for King James Bible of 1611. Menno Simons (1496-1561) was a priest who could not accept some teachings of the Catholic Church because they were not in the Bible. He renounced the priesthood and held that the church should only baptize believers, not infants. His followers became known as Mennonites; John Calvin (1509-1564) was a French pastor and theologian and the father of “Calvinism,” which includes the doctrines of predestination and the absolute sovereignty of God in salvation. These doctrines are foundational for Congregational, Baptist, and Presbyterian churches.

These are some of this great cloud of witnesses who lived at the dawn of the Age of Discovery when European countries began to sail the seas to explore far-off lands. In doing so, they would bring the Christian faith with them and spread the Gospel around the world. Their charters would reflect evangelism. The Christian faith would undergird Western Civilization and the freedom idea that became America would have its roots in places like Roanoke Island, Jamestown and Plymouth Rock.

Too many colleges and high schools no longer teach the faith story that accompanied these Christians and provided the foundational principles for the United States of America. In many classes, the history being taught is an intentional revisionist history aimed at advancing worldviews counter to that of Christianity. However, the bottom line for you is that you would not be here or live in the America you love had it not been for this great cloud of witnesses who were at heart reformers.
For more information consult the book To Know With Certainty; Answers to Christian Students Questions on Leaving High School. Available from Amazon or Westbowpress.com but to order a signed copy go to www.toknowwithcertainty.com.